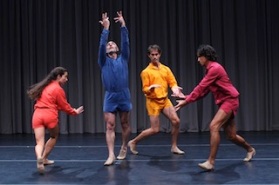 Technically, a critic would not be remiss in describing choreographer DD Dorvillier’s Danza Permanente as an interpretive dance based on Beethoven’s String Quartet in A Minor (op. 132), but that would be reductive. Dorvillier’s ambitious work invites interpretation through lenses decidedly outside the repertoire of dance criticism.

Nowhere is this more apparent than in its use of symbolism and color.  Each dancer takes on the role of a specific instrument. Naiara Mendioroz (red) Fabian Barba (purple) represent the two violins, Nuno Bizarro (yellow) is the viola, and Walter Dundervill (blue) is the cello. This creates a kind of synesthesia effect, with music, dance and color blending in a unique form of expression distinct from the sum of its parts.

It is a testament to the talents of Dorvillier and his performers that these disparate elements coalesce into a holistic form so seamlessly. Throughout the piece, the dancers express each element visually, not only in terms of a scientific spatialization, but also as qualia (the inherent feel of the music/movements). Highly-effective use of lighting and an impressive ambient score composed by Zeena Parkins further contribute to the visual depth of the piece.

The tempo of the piece begins with Mr. Dundervill, the cello, gliding in slow, solemn movements, indicative of a cello in pianissimo playing long notes in legato. Mr. Dundervill’s pitch is low, as represented by a melancholy hand placed in front of his face while he sways back and forth, his feet striking the floor according to the rhythm of the Beethoven piece.

The other three dancers begin to follow Mr. Dundervill’s lead, giving rise to a chordophonic harmony that governs Beethoven’s unheard piece . This continues until Ms. Mendioroz wheels around the stage in a frenzy, breaking the dissonant homophony of the group. The effect is reminiscent of the violin solo in allegro, with high amplitude, scattered pitch from high to low to high, and culminating in a segue back to the familiar dissonant homophony.

This time, however, the dancers position themselves differently on the stage, as if the solo has somehow rearranged the molecules of the performance. This is a remarkably effective device, compelling us to examine Beethoven’s work in a new, pseudo-synesthetic context.

The Second Movement begins with the dancers aligning themselves in the far right corner of the stage, this time facing the back curtain. A sequence of rotations begins clockwise with Ms. Mendioroz as the centerpoint and Mr. Bizarro, Mr. Barba, and Mr. Dundervill moving spatially around her in distinct coordination with the unheard opus. Mr. Dundevill is the first to return to his position facing the back curtain.

The rotation represents a shift in key, from A Minor to C Major, while the synchronicity in alignment, proximity, and movement fosters a beautifully spiraling form. This form is  equivalent to a consonance in the music, which is heard in the major chord, representing a conventional Gregorian sense of “goodness.”

Finally, towards the end of the Second Movement, Mr. Dundervill and Mr. Bizarro actually fall to the floor, as the group returns to alignment facing the back. Both dancers slide gracefully while Mr. Barba and Ms. Mendioroz remain standing with hands in the air, representing a contrast in pitch between the violins and the viola and cello. This marks an interesting point in the piece. While we heard consonance, we saw dissonance in the registers and tones played by both sets of instruments.

This sense of contrast, staged in conjunction with the familiarity of Beehtoven’s timeless work, is the lynchpin of Dorvillier’s vision, which is not so much a dance as an illustration of human perception in all its ambiguities. In the hands of a skilled artist, the lines between sight, sound, smell and touch are as illusory as the lines we so often draw to divide art forms that are all part of the same spectrum of expression.

Danza Permanente ran at the The Kitchen through September, 2012.

Follow Flat Iron Hot! on Twitter for more on events, culture and happenings in the Flatiron District and Chelsea

All the Hot Happenings In the Flatiron District!